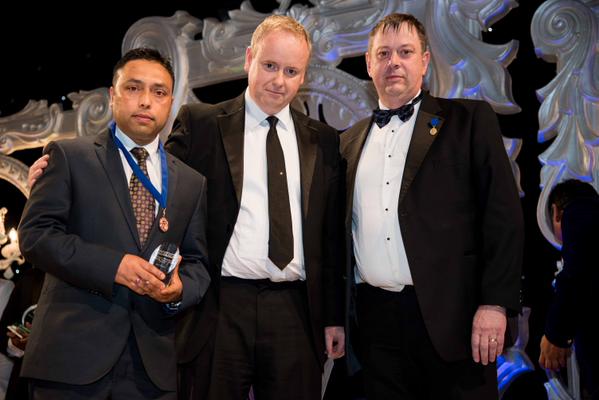 We are delighted to announce that Bishal Rasaily, Executive Chef at both Pushkar and PRAZA, cooked up a storm during the final of the 2015 UK South Asian Chef Competition (SACC) and was crowned one of the three prestigious winners.

Bishal was one of eight UK wide finalists to take part in the live cooking competition, and his application and three submitted recipes met the rigorous SACC criteria and were judged as ‘outstanding’ by the judges.

The 11th national final of the SACC took place on 12th October 2015 at Bradford College, following a pre-competition dinner at the Aagrah Restaurants Head Office on 11th October, where finalists met judges and fellow competitors. Monday’s live competition saw the finalists battle it out whilst they each cooked a total of three dishes for the judges, against the clock. The competitors were asked to produce creative and innovative dishes using their own original recipes. It was open to all restaurants in the UK and their chefs, and any restaurant nominated by its customers for their Asian food.

Casting their professional eye over the competition, were a team of judges representing the Craft Guild of Chefs and the catering industry.  These included Andrew Green, who is the Director of Operations for the Craft Guild of Chefs, Award Winning Curry Chef, Stephen Gomes, who was judging for the 5th consecutive year, Stephanie Moon, currently a Chef Consultant, who has also previously appeared on Great British Menu as well as Alan Colley, Business Development Manager at Major International Ltd, and Andy Bray Chef Lecturer at Bradford College.

Andrew Green, Chairman of the Judges, said: “The standard is exceptionally high.  The South Asian Chef competition is one of the very best around.  There is an abundance of great talent out there within the Asian market; and now in its 11th year the standard just keeps getting better and better and the competition continues to go from strength to strength.”

The day culminated in a glittering black tie dinner and awards ceremony, organised by The Aagrah Annual Business Charity, where the three winners were announced. Our Executive Chef, Bishal, scored exceptionally high on the appearance, textures and flavours of his dishes but lost out on vital marks due to a couple of his dishes being presented just over a minute after the deadline time. However, Bishal had impressed the judges enough to secure himself as one of the three prestigious winners of the 2015 SACC award, coming third place and winning a prize of £750.

Bishal Rasaily, Executive Chef at Pushkar Cocktail Bar & Dining and Praza, said: “I was delighted to be announced as one of the three winners at the South Asian Chef Competition! It was a thoroughly exciting experience and I have learned so much from the contest, the judges and the other talented Chefs who took part.”